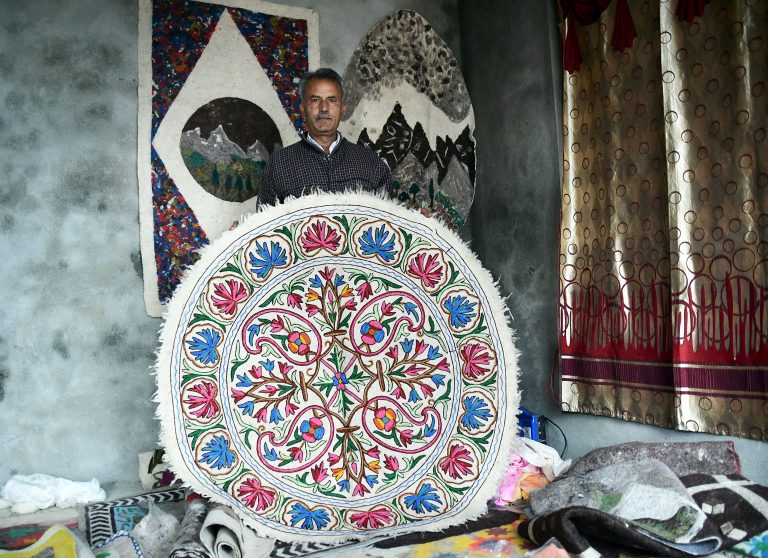 Farooq Ahmed, an expert craftsman of Srinagar, has breathed new life into the sector by aligning the industry with modern technology. He has combined the Australia-based “Nano Felting Technique” with traditional handicrafts to create a new craft that is unmatched in the world.
This makes Farooq Ahmed the only craftsman in India who has combined this with traditional felting. New handicrafts, silk carpets and scarves are being made using the technique. The products made by them are also liked by the public.
It is worth mentioning that Kashmir valley has centuries-old handicrafts like paper mashi, shawl weaving, carpet weaving, handloom, khatband, wood carving, namda sazi and gaba sazi etc. In such a situation, it is considered a good thing to harmonize these crafts with modern techniques.
Farooq Ahmed, while talking to Milap News Network, said that it took him at least two years to learn this skill during which he was able to create these innovative products after tireless efforts day and night. He said that a designer from Delhi helped him to learn this new technique.
“He helped me a lot, when he told me this technique, I didn’t think that I would be able to learn it, but Alhamdulillah, after a lot of hard work, I succeeded in it.”
It should be remembered that Farooq Khan’s family has been associated with the textile industry for decades and he is said to be the last hope of the textile industry in Kashmir. He has also received many honours at the national and local levels. Due to their efforts, many new designs and techniques are now being incorporated into the traditional art of Kashmir. They say that they are trying to restore the glory of this dying art by giving a new life to the traditional handicrafts of Kashmir with these products.
Farooq Khan is working on this new technique with a private craft organization but is not happy with government policies to promote artisans.
“There is no support at the government level to promote this craft while raw materials are also not available in the valley,” he said.
Farooq Khan claims that he is the only artisan who creates new products using this technique.
“To the best of my knowledge, I am the only craftsman to create a new product with such a technique.”