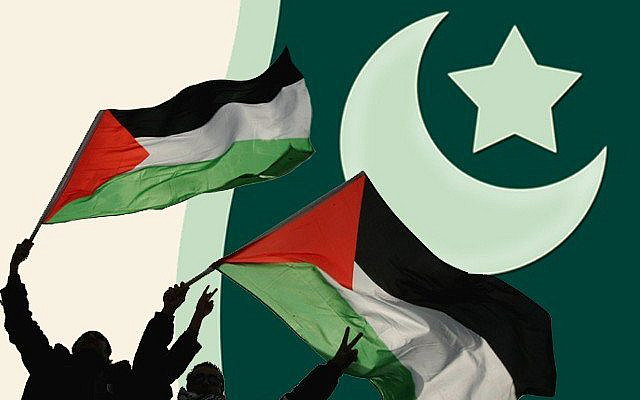 Since the inception of Pakistan as an independent nation-state, it has been a staunch supporter of an independent Palestinian state and through such strong advocacy of this cause, it has also shown a degree of resoluteness in its non-recognition of the world’s only Jewish state that is Israel.

Every time news comes that a conflict of some kind has started once again between the Israelis and Palestinians, the first thing that can be witnessed in Pakistan is a rare show of unity between the far left and far right as both groups are at odds with each other because of their obvious ideological differences and the latter being often violent in its show of agitation against perceived threats to their desired Pakistan where every decision has to be made per Sharia without getting mired in anything secular and western. Be it a mullah from Pakistan’s conservative north-western provincial capital Peshawar or be it a liberal fashionista who claims to be an Instagram influencer from Lahore, Karachi, and Islamabad, the support for Palestinian statehood and “resistance” against Israel remains the only thing unwavering and unchanged no matter what. Surprisingly, that’s the only thing they agree on and think there can’t be a cause bigger than the one about the “maltreatment” of their Palestinian brethren at the hands of Sayhooni riyasat (Urdu for Zionist state). Therefore, be it the right-wing student groups and political parties such as Jamaat-e-Islami and Jamiat or the left-wing groups and political parties such as Progressive Students Collective, Haqooq e Khalq Movement and PPP (Pakistan’s Peoples Party), everyone considers it an obligation almost religious in its nature and intention to stage a protest, walk, march or mass –demonstration in major urban centers. The espousal of the cause is there but it has to be noted that there remain an array of different viewpoints and reasons which govern and dictate the very action of support. It consists of leftists bringing up arguments where the Israeli state is being seen as an “Apartheid regime” carrying out “dehumanizing policies” against Palestinians.

Pakistani leftists who claim to be well-acquainted with global affairs and with the right sight and vision best suited for analysis think of this conflict not in religious terms but in very secular terms where they see different shades including that of settler colonialism and also of Nazism since they are quick to equate the ruling regime of Israel (be it, Sharon, from past or Netanyahu from present) to the atrocious and hateful ideology of Adolf Hitler.

Before a Zionist of any branch reading this article jumps to the conclusion that these leftists are anti-Semitic, I would like to divulge further that how many renowned left-wing Pakistani activists try to stay as distant as possible from any accusation of antisemitism since they claim to have no religious bigotry in their dogma and that they rather want Jews to co-exist peacefully with others and their odium is only directed towards Zionists who they think are either “not good Jews” or are not even “Jewish” to start with since they think they don’t want to hurt any religion in particular and their campaigns are only political.

There remains a dard (Urdu for pain) for Palestine in their hearts as seen in the “Poem for Palestine” penned by the renowned Pakistani poet and author Faiz Ahmad Faiz (an avowed Marxist, awardee of Lenin Peace Prize by the Soviet Union and founder of the Communist Party of Pakistan) and similar compassion for Palestinians can be seen in the works of Habib Jalib (a celebrated Urdu poet and left-wing activist). Apart from Urdu poets, the Palestinian cause has also been championed by famed political scientist Eqbal Ahmad who has not just been an important influence on the intellectual development of Palestinian literary bigwig Edward Said but had also met and advised Yasser Arafat and other members of the PLO on several occasions. To this day, the legacy of the likes of Faiz and Eqbal is being carried forward through several left-wingers scattered across different spheres of Pakistani intelligentsia, media, and arts. Many young and western-educated and English medium schooled Pakistanis continue to incline towards leftist circles on many issues of national and international significance.

Similarly, Pakistani right-wingers are not behind their leftist counterparts in demonstrating how much love and empathy they have for Palestinians. But this love is purely religious as they see Israel’s confrontation with Palestinians as a battle between Haq o Batil (Urdu for good and evil) and for them, the good is what Islam stands for and the evil is everything that is non-Islamic. Pakistani right-wing is very clear-worded about its support for Palestinian Muslim brethren as they see the entire conflict from the lens of Islam and they also, therefore, resort to the usage of typical Islamic terms such as Jihad, Shahadat (martyrdom), and Kuffar (infidels as here it is referred to Jews) when articulating their position on the conflict. For them, every Muslim is brother to another regardless of geographical, racial, and lingual differences therefore it is their duty to support whether it’s Hamas, Fatah, or just a non-partisan Palestinian civilian as much as they can be it through massive rallies or calls for Jihad against Israel since they also see it as an occupier of Islam’s third holiest site that is Al Aqsa mosque. The right-wingers will rally, pray, curse Israel and also not shy away from openly praising Hitler for Holocaust. For most of them, Holocaust is a lie and globally there remains a constant threat of Yahoodi Saazish (Urdu for Jewish Conspiracy). A good majority of them are also proud anti-Semites.

No matter how much Pakistan’s left and right-wingers curse and mock each other, the only thing which unites them apart from the fact that they belong to the same country is their contempt for Israel and their shared joy in cursing Zionism.

Courtesy: THE TIMES OF ISRAEL