An OGW Speaks to KASHMIR CENTRAL 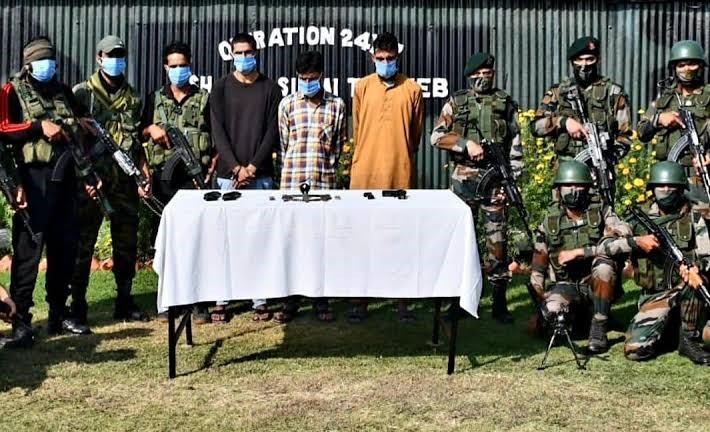 Pakistan Operatives In Kashmir Have Singular Focus For 2022

Attempt to make every terror activity look like indigenous, local protest against state

Over the next few months, Pakistan operatives in Kashmir are going to initiate heavy recruitment of Kashmiri boys and young men into the OGW (Over Ground Worker) network and sleeper cells. A large number of them will be what the police call hybrid militants. They will lead normal lives and will carry out some terror activity like throwing grenades or going in for target killing.

All the ISI operatives who have come into Kashmir or have been here for long – they have been given a singular task. Carry out mass recruitment of local youngsters into the terror circuits in Kashmir. They have been told to focus only on this. It is their special task. They have been told to give it top priority. Their strategy is to involve more and more Kashmiris in the anti-state operations. Pakistan’s purpose is that all terror activities must look like they are solely the handiwork of local youth. They want that every terror activity must look like an indigenous and local protest against the state. The youth are being recruited for small tasks like grenade blasts or target killing of some person. They are not being involved in any big mission as of now. For the purpose of recruitment into sleeper cells or hybrid networks, ISI operatives hunt for those youngsters who have gone to jail for OGW activity, stone pelting etc. Once these young men go to jail, most of them do not have any fear of law. Their thinking becomes like this: There are already cases registered against me. What difference will it make if some more cases are registered?

Vo paise bhi phenkte hain bohot. The ISI operatives give a lot of money to boys and girls whom they want to recruit in the terror circuits. For the boys and also girls from poor and needy families, sometimes the involvement becomes a majboori. One, they get money. Second, they are psychologically brainwashed to think that they are doing a very big task.

Once the boy gets involved in even a single terror activity, there is no escape for him. There is no exit door. He is trapped. The statistics, the data – all of it reveals that youngsters who have been arrested earlier for OGW or stone-pelting activities are most vulnerable to be recruited in sleeper cells or as hybrid militants. Now new ISI operatives have come into Kashmir. The police, the Army and the security agencies are aware that about 20 men have infiltrated from the Karna sector. They have come in two to three groups of seven to eight persons each.

They have been given tasks. Vo yahan terror network ke liye finance handle karenge. They will work upon the strategies for attacks. They will choose the locations for the action to be carried out.

Attempts To Create Disturbances Outside Kashmir Region
There is a shift in the strategy of the terror operatives. Attempts are being made to create disturbances on the other side of the Jawahar tunnel. Recently, there was a blast at a busy junction in Udhampur in which one person was killed and some others were injured. The blast was caused by an IED set up by militants. This was the first terror attack in Udhampur in seven years. Grenades were found by the police in Jammu. The message is clear. The terror operatives are covering more and more area. The blast at a busy junction in Udhampur obviously means that the terror operatives have a network in the town. Without local sleeper cells, OGWs or hybrid militants, such an activity cannot take place. Regarding the grenades found in Jammu, a local network is supporting that too. The Police, the Army, the security agencies – they are aware that some Pakistani terror operatives have infiltrated into Kashmir. Many cordons have been organized, many searches have been held in north Kashmir and also in south Kashmir, but they have not been able to trap anybody.

I have observed that the Police, Army or other security agencies usually don’t have the deep intelligence to usually catch the terrorists alive. But how will they come to know of the terror operatives or any such underground activity if they do not have links among OGWs, stone pelters, others associated with the terror network? If they do not have strong connections with those in the terror network, how will they build deep connections with them? What is the benefit if they keep taking their information from some man who is identified with the Army? What input will he have? You will get deep intelligence from deep connects within the same network. A man comes from Pakistan and starts living in Kashmir. The police and other agencies usually come to know about him only after he is killed.

Police Come To Know Of Pakistani Terrorists Only After They Are Killed
I find it funny every time when the police say that so and so terrorist killed in anti-insurgency operation was found to be a Pakistani. Look at what this reveals. They come to know that the man was a Pakistani only after he is killed. All these months when he was circulating around in Kashmir – living here, planning his activities here – the police or the security agencies did not come to know about him. It is so strange that after the recent Hazratbal incident, a senior police officer gave the statement to the media that the killed terrorist was identified as Manzoor alias Haider, a Pakistani national. The police officer even said that man had been active in the Valley for a long time. When I read such statements, I think that if the man had been active here for a long time, what was the police doing? What were the Army and the security agencies doing? The Pakistani terrorists keep moving about. They have such a high degree of familiarity with the local terrain. There is a whole network which supports them here. The backing is given by the locals.

All the Pakistanis who come here to Kashmir are trained in brainwashing the local youth within the matter of an hour. Their talk is scripted. They are fully trained in what to say to the local youth in order to involve them in terror activities. That is why the boys get trapped very fast. Many youngsters of Kashmir already have warped thinking. Their brains are programmed by the software that they have been exposed to since early childhood. Words like azadi, ghulami etc are drilled into their head. They are vulnerable to talk like shaheedi. The Pakistani operatives know very well how to trap these youth.

The Pakistani operatives feed the same to the boys. Then what else will you find but a terrorist?

Ye saara soch ka khel hai. The ISI operatives play upon their soch. The Indian state can also powerfully impact their soch. But again and again, I see that the same effort is not being taken from this side.

The System Must Calibrate Punishment For Raw Recruits For Minor Offences
If a youngster has serious involvement in the OGW network, then police have to be tough with him. But if his involvement is not deep, then the police must calibrate the approach towards him. If a youngster has only been involved in a minor role like reaching food or dry fruits to someone in the terror network, the security forces should be lenient towards him. A tough approach will harden him. He will get into the mind space ki us ke saath bohot zulm hua. It is easy to slap cases on him, but changing his mind is very difficult. To take revenge against the system, the youngster can turn into a dangerous force. It can happen because some insensitive officer hardened that young man. Then his hatred level peaks. That is why it is very important for the system to calibrate the punishment to be given to raw recruits for their offences. Suppose an officer comes to know that a youngster is an OGW or a raw recruit in the terror network. They directly go and arrest him. Then they come to know that the youngster has very limited information. Perhaps a better approach shall be to trail him with human and technical resources. Then one can reach his handler, one can reach the network with which the youngster is associated.

When the police or any other security agency arrests an OGW early, his support system gets alerted. They change their modus operandi. In this way also, the early arrest of a raw recruit does not help. This is what is most important to deal with the latent anger among indoctrinated youngsters. The system needs people who have the right approach. The system needs people whose aim is not punishment for the boys but to reform them and get them on the right track.