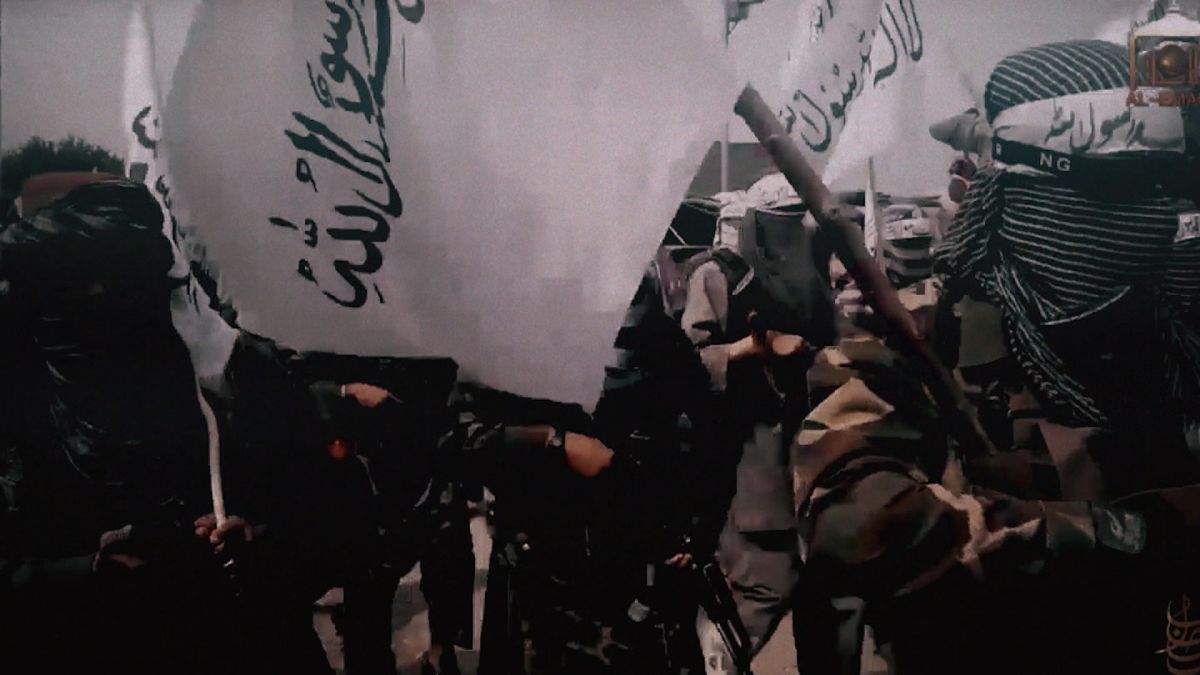 Kabul (CNN)A raid on a remote village in Afghanistan kills an ageing al Qaeda leader wanted by the FBI. Messages to the group’s cells around the world are seized. Two drone strikes on militants in northwest Syria swiftly follow.

Details of a little-publicized October raid targeting a senior al Qaeda militant, Husam Abd-al-Rauf, in the Afghan province of Ghazni have revealed how the terror group continues to thrive in Afghanistan under Taliban protection, and remains connected to its other franchises across the globe, according to accounts provided by Afghan intelligence officials to CNN.

The operation against al-Rauf netted al Qaeda messages between Afghanistan and Syria, one Afghan official said. Two rare US strikes against al Qaeda militants in Syria’s Idlib province followed in the ten days afterwards, although US officials played down any connection.

The previously undisclosed details of the al-Rauf raid contribute to a picture of how tight al Qaeda’s bonds with the Taliban are, according to one senior Afghan intelligence official speaking to CNN. It is “now much deeper than we think,” the senior official said. “It is not only now an ideological connection, it’s also a family connection. There are intermarriages. And that is impossible for Taliban to stop, and to not allow [al Qaeda] to do something outside” the country.

The official said al Qaeda is given sanctuary by the Taliban in exchange for expertise in fund-raising and bomb-making. The terrorists “collect money from different parts of the world and give it to the Taliban,” the official explained. “They train suicide bombers and help them in strategic thinking. In return, the Taliban provide them shelter.”

That assessment from Afghan officials, and the details they provided of al Qaeda in Afghanistan’s connectivity with cells around the world, will make uncomfortable reading for the Biden administration as the US troop withdrawal gets underway. President Joe Biden has staked much of his plan to get out of America’s longest war on the terror group no longer being a threat to Americans from Afghanistan. When announcing the withdrawal, he said that the US had gone to Afghanistan to be sure it could “not be used as a base from which to attack our homeland again.” With al Qaeda “degraded,” it had “accomplished that objective,” he maintained.

Yet in a series of interviews in Kabul, Afghan officials depicted a terror group both enjoying a comfortable shelter in Taliban-controlled areas, and hunted at times by their special forces. One Afghan official suggested the group was about 18 months away from being able to launch attacks on the West, and capable of launching regional attacks from Afghanistan by the end of the year. The rare interviews were granted as Afghan officials grow increasingly concerned that the US withdrawal from the country — due for completion before the twentieth anniversary of the 9/11 attacks carried out by al Qaeda — will lead to a surge in the group’s activities.

The Afghan concerns will also build on anxieties over the Taliban’s apparent rejection of the diplomatic process it embraced last year with the Trump administration. The Taliban’s pledge not to cooperate with terrorists or give them shelter was critical to the peace deal signed with the US in Doha last year, under the Trump administration. The first bullet point of the agreement states that the insurgent group “will prevent the use of the soil of Afghanistan by any group or individual against the security of the United States and its allies.”

The senior Afghan intelligence official said the peace pledge to the Trump administration “was just like a joke between themselves. They knew that this will not happen.”

The Afghan officials cited previously undisclosed details about the October raid targeting al-Rauf, also known as Abu Muhsen al-Masri, as evidence of al Qaeda’s growth. He died of his injuries shortly after being taken into custody by Afghan special forces in the tiny Taliban-controlled village of Kunsaf, in Ghazni province.

He was the subject of an arrest warrant issued by a Manhattan court on December 27, 2018 for “conspiracy to kill United States nationals” and “providing material support for a foreign terrorist organization,” according to the FBI wanted poster released at the time. In the past decade, he had released a series of audio recordings and videos through al Qaeda media channels. At times he railed against “the liar in the evil White House who claims that he will withdraw their forces from Afghanistan because the mission has ended.” At other points, he scorned Britain and the United States for being racist.

“He was in touch with other key members of al Qaeda in the rest of the world. He had some operational programs,” said the senior Afghan intelligence official, separately. The official declined to give more details, citing ongoing counter-terrorism work, but added: “His compound was very well-protected by the Taliban.”

In the messages found on his computer, al-Rauf told his al Qaeda counterparts that Afghanistan could soon return to its pre-9/11 position as a leading hub for the terror group, the senior official said. He expressed concern that the next phase of the US withdrawal would lead Afghanistan to “become [a] base, a stronghold for those people to organize attacks outside [the country].”

The senior intelligence official said he did not have any evidence at present to suggest that al Qaeda was planning operations beyond Afghanistan. “But they are entering a new place of reorganization and then making missions on a larger scale,” he said, adding that a detainee from the al-Rauf operation had provided evidence of this during interrogation.

In a possible sign of the global reach of the terrorist group’s Afghan cells, two pinpoint strikes against al Qaeda militants in Syria were carried out by the US in the days after the al-Rauf raid, and the discovery of messages on his computer to Syrian al Qaeda militants. A second senior Afghan intelligence official told CNN that the US had asked for a delay in publicizing the raid against al-Rauf, which occurred as much as a fortnight before it was announced on October 24. That official added the raid was “most likely” connected to the Syria strikes, but added they had no evidence to that effect.

US drones hit two targets in Syria on October 15 and 22, striking al Qaeda cells. Few details were released about the first strike, while the second killed seven al Qaeda leaders at a meeting, according to a US statement released at the time.

One US official played down connections between the al-Rauf raid, the intercepted messages, and the sudden flurry of strikes on al Qaeda in Syria. Lt Col Karen Roxberry, a spokeswoman for CENTCOM, the US command responsible for both Afghanistan and Syria, said in a statement it was “not aware of a link” between the raid and the Idlib strikes.

Suhail Shaheen, a spokesman in Doha for the Taliban, who prefers the name the Islamic Emirate, told CNN the allegations were “not true.” He said the government in Kabul had for the past two decades wanted “to create suspicion to make foreign forces stay,” so they “will then stay in power and have billions to make their bank accounts bigger.”

Shaheen said the Emirate’s agreement with the United States specified they would not permit Afghanistan to be used to attack the United States or its allies. “If we do, we create problems for ourselves, and there will be no peace in Afghanistan. War after war. It is against our interest.” He said that after the deal with the US in Doha was signed, their military commanders were gathered together and that commitment was spelled out in a meeting, and then in a letter.

A second letter was then sent, Shaheen said, in which their leadership said any Taliban member with foreigners in their ranks would be immediately fired and taken to court. He said that included fighters from neighbouring Pakistan. “Everybody,” he said.

A US Treasury report published in early January this year said al Qaeda was “gaining strength in Afghanistan while continuing to operate with the Taliban, under the Taliban’s protection.”

The Taliban’s relationship with al Qaeda has been the subject of differing assessments, with US officials at times accused by critics of playing up the threat in pursuit of greater military resources, and more recently playing it down ahead of the planned withdrawal.

While many analysts believe the Taliban ultimately regrets harboring the terror group behind 9/11 and sparking the US invasion, they have in the past decade promoted Siraj Haqqani, an al Qaeda-affiliated insurgent who heads the Haqqani Network, to become the Taliban’s military operations commander in 2015.

The senior Afghan intelligence official said that several details about al-Rauf’s time in Afghanistan showed his intimate connections to the Taliban leadership. One of his Taliban handlers, known as Zahed, was on a list of prisoners the Taliban requested be released as part of the earlier Doha peace talks, the official said. “At that time, we did not know the connection,” the senior Afghan official said of the early 2020 releases. “It shows the sympathy of Taliban leadership for that person, who [was] working as a liaison between al-Qaida and Taliban.”

A UN report published in February said the “killing of several Al-Qaida commanders in Taliban-controlled territory underscores how close the two groups are.” The report mentioned al-Rauf’s death, but also the killing of a deputy leader of al Qaeda in the Indian subcontinent, Mohammad Hanif, on November 10, in Afghanistan’s Farah Province. The report cites a UN “member state” as assessing Hanif “had been providing bomb-making training to Taliban insurgents.”

The UN report concludes: “Both appear to have been given shelter and protection by the Taliban.” It adds there is “further evidence of close relations between the groups,” citing the Taliban’s request that the wife of a senior al Qaeda figure killed in a 2019 raid be included in the 2020 prisoner exchange with the Afghan government.

The senior Afghan official declined to name the current al Qaeda leader in Afghanistan and said that technically Ayman al-Zawahiri remained the group’s head since the death of Osama Bin Laden in 2011. “Our intelligence still suggests that al-Zawahiri is somewhere in the FATA area of Pakistan in that area,” he said. “But we have no clear intelligence about his exact location.”