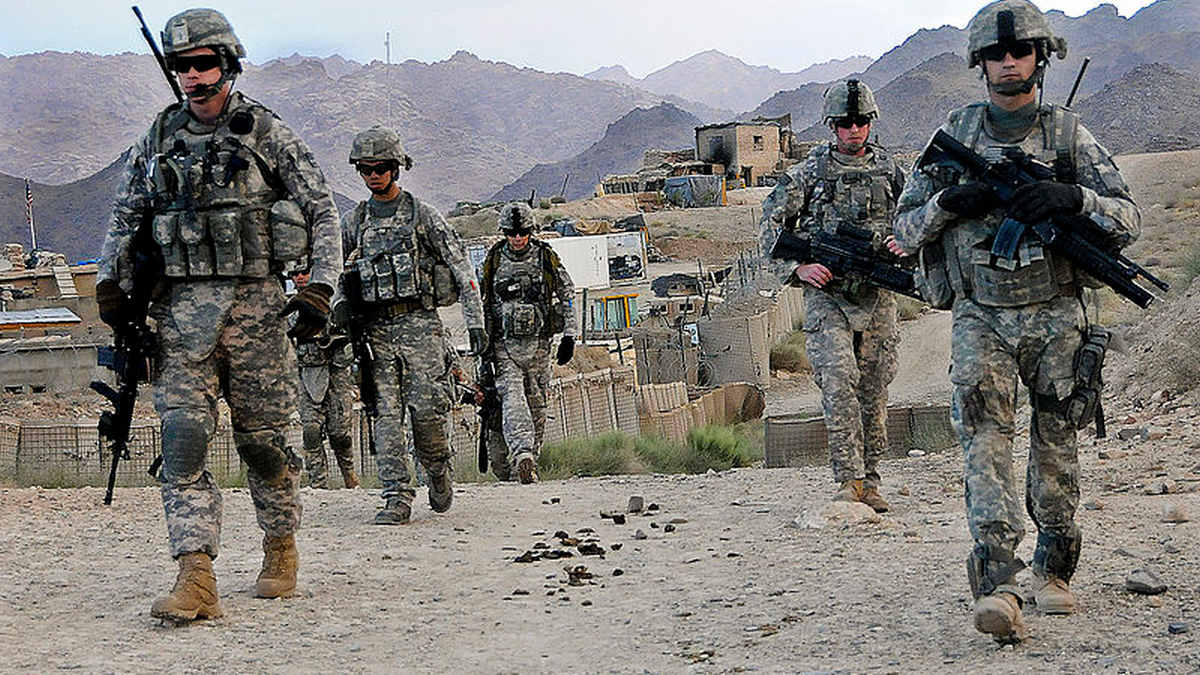 Amin Agha worked as a manual laborer for eight years at Ba-gram Airfield, the U.S. military’s largest base in Afghanistan.

But as the United States begins its final troop withdrawal from the country, Agha is among hundreds of Afghans who have recently lost their jobs at the facility.

The American military has employed tens of thousands of Afghan civilians and contributed significantly to the local economy since the U.S.-led invasion in 2001.

The sharp reduction of foreign forces since the peak of the war in 2011 has inflicted an economic shock on Afghanistan, severely affecting businesses, people’s jobs, and their incomes.

Thousands more Afghans will be affected when the last foreign troops depart by September 11.

Observers warn that a fall in international aid following the pullout will compound the already ominous economic conditions in Afghanistan, where poverty and unemployment are soaring.

“People are in trouble,” says Agha, a 33-year-old construction worker who lives with his family of eight in a village near Ba gram Airfield. “Some people who have lost their jobs can’t even afford to feed their families anymore.”

Even as Afghans confront a bleak economic future, many are also bracing for an intensification of the decades-long war after the withdrawal. Many expect the pullout to further undercut the weak Kabul government and encourage the Taliban troops to seek war instead of peace.

The international military presence has been a key source of employment for Afghans for nearly 20 years, attracting cooks, cleaners, manual laborers, mechanics, translators, and security guards.

Afghan businesses were contracted to supply equipment, fuel, fruits, vegetables, and bottled water. Transport companies ferried supplies to and from bases. Construction companies were employed to build bases, including constructing watchtowers and other facilities.

In 2011, when NATO had 130,000 soldiers and around 800 military bases in Afghanistan, the U.S. government and various agencies dispersed some $5 billion directly to Afghan companies as prime contractors, according to the Special Inspector General for Afghanistan Reconstruction (SIGAR), a U.S. government watchdog.

The foreign military presence even altered the country’s demographics, with an unpublished United Nations report in 2014 estimating that 11.5 million Afghans — around 40 percent of the population lived within a five-kilometre radius of at least one military base or facility.

In the capital, the livelihoods of nearly 90 percent of Kabul’s population of some 5 million were directly tied to the foreign military presence, according to the UN report.

But business has dramatically fallen off since 2014, when tens of thousands of foreign combat troops departed, and the number of bases fell to just 80. Only a dozen such military facilities remain open and they will be closed or transferred to Afghan control by September.

The shrinking foreign military presence has devastated the lucrative logistics and construction sectors. Many Afghan businesses catering to foreigners have closed. Owners have often left the country and taken much-needed cash with them.

The housing bubble, fueled largely by the war economy, has burst, with prices in the capital tumbling. Car dealerships in Kabul also recently reported a significant decrease in business.

The fallout from dwindling international military spending has been exacerbated by worsening security, political uncertainty and, most recently, the corona virus pandemic.

Economic growth, which stood at more than 14 percent in 2012, fell to just under 4 percent in 2019, according to the World Bank. It is expected to shrink by 5 percent this year.

Observers warn that the dire economic conditions in Afghanistan could be aggravated by reductions in foreign aid.

International development aid to Afghanistan dropped from a high of $6.7 billion in 2011 to $4.2 billion in 2019, according to the World Bank. In November, donors further cut aid, pledging some $3.3 billion in civilian assistance for 2021.

As Afghanistan’s largest foreign donor, the United States has pledged to continue funding the government and the country’s 300,000-strong national army and police force. But foreign assistance to vital aid programs has been shrinking, rights groups say.

“We have already seen that as troops have drawn down in Afghanistan there has been declining engagement by troop-contributing nations and that has often not always but often translated into, or at least correlated with, reductions in aid as well,” says Heather Barr, the interim co-director of the Women’s Rights Division at Human Rights Watch (HRW).

Some 14 million Afghans face food insecurity and malnutrition, according to the UN. Tens of thousands of people have been displaced in the past year. Meanwhile, a record number of undocumented Afghan migrants nearly 870,000 returned mainly from Iran in 2020.

“Obstacles to continuing civilian aid may stem more from worsening insecurity and political problems preventing aid from being delivered or accounted for, than from unwillingness of the [United States] and other partners to continue providing substantial aid,” says William Byrd, a development economist at the United States Institute of Peace, a Washington-based think tank.

“Over the longer run, aid will almost certainly decline, but if that is gradual and predictable it should be manageable,” he adds.

Observers say a sharp reduction in security or civilian aid would be disastrous, even leading to the collapse of the Afghan government.

“If, for whatever reason, the donors keep drawing down funding…that could bring the sudden demise of the Afghan government as we know it,” John Sopko, the head of SIGAR, said in March.

He warned of “history repeating itself,” referring to the civil war that erupted in Afghanistan soon after the Soviet Union ended its 1979-89 occupation and cut its assistance to the Kabul government. That instability paved the way for the Taliban’s takeover.

Around 80 percent of the Afghan government’s budget is funded by foreign donors. International assistance also accounts for around 40 percent of the country’s gross domestic product.

“A stoppage or sharp cutback in security aid would grievously damage the Afghan security forces — and on the civilian side could lead to fiscal collapse,” says Byrd.

Nowhere is the effect of the international military draw down more visible than in the town of Ba-gram, located just a few kilometres from the military airfield.

For years, Ba-gram was a boom town, becoming one of the epicenters of business and opportunity in the country. Fast-forward to the present day and the town’s prospects look altogether different.

Ba-gram, with a population of over 200,000 and located in the northern province of Par wan, is going bust.

The city’s bazaars, once filled with foreign goods and electronics, are mostly empty. Many businesses have closed shop. And many Afghans who moved to the area for work have since left.

Abdul Shakur Qudusi, the governor of Ba-gram district, said more than 12,000 Afghans worked at the airfield at the peak of the war. He says only about 1,700 remain.

“The presence of U.S. troops had a positive impact on health, education, and the economy,” he says. “The withdrawal is a great concern to everyone.”