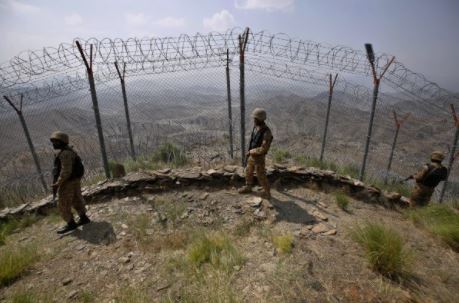 The Durand Line continues to bedevil Af-Pak relations. One doesn’t recognize it; the other ignores it when convenient.
On January 2, Taliban Ministry of Defense spokesman Enayatullah Khwarazmi condemned Pakistan’s fencing of its border with Afghanistan as “illegal.” Khwarazmi said Pakistan has “no right” to separate the Pashtun tribes that live on either side of the Durand Line.

The statement came two weeks after Taliban fighters damaged parts of the border fence erected by the Pakistan army. While Pakistan Foreign Minister Shah Mehmood Qureshi vowed to “resolve the issues diplomatically,” Taliban Information Minister Zabihullah Mujahid insisted that the Durand Line “has divided one nation on both sides,” which the

Taliban “do not want.” Despite retaking Kabul in August with support from Islamabad, the Taliban are loudly reiterating the official stance that all Afghan regimes have maintained since Pakistan’s inception: The Durand Line is an artificial border imposed by the former British Empire. Formalized in 1893 following the Second Anglo-Afghan War, the 2,670-km Durand Line was designed to separate British India and the Pakistan Army troops patrol along the fence on the Pakistan-Afghanistan border at Big Ben hilltop post in Khyber district, Pakistan, August 3, 2021.

Credit: AP Photo/Anjum Naveed, File Emirate of Afghanistan, at a time when the foreign affairs of the latter were being run from London. The 1919 Anglo-Afghan Treaty, which established the independence of Afghanistan, hinged on the recognition of the Durand Line as an official border, which was then inherited by Pakistan in 1947, when it was carved out as a separate country in British India.

“If we pay heed to Afghanistan’s claims then India can also claim all of Pakistan as its historical territory,” Pakistan’s former Foreign Secretary and Ambassador to the United Nations Shamshad Ahmad told The Diplomat.

“Afghanistan’s border issues are historical and have been with past empires. Pakistan has legal right over its territory. Even China has border issues with… its neighbors, the same is true for India – this doesn’t mean they would break themselves.” While the Kashmir conflict rages as a legacy of the Partition, the separations of the historical Punjab and Bengal territories have been officially accepted, with parts of each joining the separate Muslim homeland in British India. With Pakistan’s creation owing itself to, among other geopolitical factors, the British need to make the next move in the “Great Game” with Russia, the newly formed state conveniently used the colonial apparatus for its own experiments. Among these was the Federally Administered Tribal Areas (FATA) along the Durand Line, which served as a buffer between British India and the Emirate of Afghanistan and was run by the draconian Frontier Crimes Regulations (FCR). The lawlessness in FATA, formally merged into Khyber Pakhtunkha in 2018, has been maintained and used by the Pakistani establishment to influence matters in Afghanistan, which the military elite has long considered a source of strategic depth against India.

“They say the Afghan rulers don’t recognize the Durand Line, but the actual problem is that Pakistan’s rulers don’t recognize the Durand Line. [Former military dictator] Zia-ul-Haq used to say ‘Afghanistan is our fifth province’ and that his how the country continues to be treated by Pakistan,” maintains Abdullah Nangyal, a leader of the National Democratic Movement and formerly a member of the Pashtun Tahaffuz Movement (PTM).

“It is because of this policy that the Pakistani Taliban are now increasingly launching terrorist attacks as well, and have completely taken over the tribal areas,” he further told The Diplomat. Resurfacing in synchrony with their Afghan counterparts, the Tehrik-e-Taliban Pakistan (TTP) increased their terror raids in Pakistan following the Taliban’s Kabul takeover, even carrying out a gun attack in Islamabad last week. Instead of consolidating on the counterterror gains that pushed the TTP into the periphery, Prime Minister Imran Khan opened negotiations with the group, before the Pakistani Taliban ended a ceasefire last month.

The Pakistani military establishment has used jihadist groups domestically to help clamp down on nationalist movements, such as Baloch and Pashtun separatism, in addition to spearheading radical Islamization in the region, notably in Afghanistan and Kashmir. That has required keeping the Durand Line porous, which helped Pakistan maintain Afghanistan as its backyard for regional jihadi assets.

Under the Ashraf Ghani regime, Islamabad and Kabul regularly accused each other of shielding jihadist groups that targeted the other country’s territory. In 2018, Army Chief Qamar Javed Bajwa inaugurated the fencing of the Af-Pak border. The move was met with objections from the Ghani regime, which are now being repeated by the Afghan Taliban. “The leadership of the Taliban would possibly accept the line as border in front of the Pakistani establishment, but they are afraid of the reaction of the [Afghan population] as well as their low ranks. The new dispute [over the] border is considered by some Afghans as drama by the Taliban to show the Afghans that they are not linked with Pakistani establishment,” Afghanistan-based activist Shafi Atal told The Diplomat.

Many locals believe that the Taliban is looking to woo the masses and gain legitimacy as rulers of Afghanistan with their statements on the border, since the vast majority of Afghans do not consider the Durand Line to be legitimate.

Under the British Empire, and then for the first seven decades of Pakistan’s existence, the Durand Line being upheld in international law meant little to the population living on either side of the border, since their movement continued unhindered. While this allowed the locals to engage in trade and other commercial activities to sustain themselves, in addition to maintaining familial and tribal roots on both sides without having to relocate, the unregulated channels also facilitated smuggling and drug trafficking. However, locals maintain that any policy that restricts their movement will be detrimental to their sustenance and hence unacceptable to the vast majority of Pashtuns on both sides of the border.

In interviews with The Diplomat, many locals urged both the Afghan and Pakistani governments to put the validity of the Durand Line to a referendum and ask the locals what its status should be and whether they want to stay with Pakistan or join Afghanistan. They maintain that the border dispute could flare into a major crisis, which could have consequences far beyond the tribal belt. The locals continue to be deprived of basic human rights even while they face the gory menace of the Taliban. Many living in the region perceive Pakistan’s move to fence the border as an attempt to target their Pashtun identity. “The ex-FATA population has a very pragmatic view about the Pak-Afghan border. They recognize it as a border, which supports their ethnic bonds and source of livelihood.

However they would want it as fluid and easy for both sides,” tribal activist and blogger Mona Aurangzeb told The Diplomat. The U.S. withdrawal from Afghanistan meant that the past stream of billions of dollars from Washington to Islamabad is no longer there, and an increasingly micromanaging China is seeking to take charge. As a result, the Pakistani military establishment has coupled the botched FATA merger with unilateral border fencing in a bid to artificially prop up a semblance of stability. Therefore, the volatility, which has roots stretching back centuries, is cloaked by an iron fist, with complete disregard to the human development of the area, without which no progress is possible. “Pakistan’s rulers only look at the Afghan border, and Af-Pak relations, in terms of security, in terms of the spillover effect.

They have never thought of building the belt, improving its economy, giving the locals basic human rights, trying to create a situation where they are politically more integrated with Pakistan – the current superficial integration is detrimental for Pakistan’s interests,” Lieutenant-General Talat Masood, former secretary of Pakistan’s Ministry of Defense Production told The Diplomat. While uplifting the local population would help develop the cumulative human capital, it would also result in further resistance toward totalitarian hegemons, whether indigenous or alien. Pakistan, still basking in its status as the kingmaker, continues to fail to fathom a truly independent Afghanistan and a democratically governed tribal belt. For, while Afghanistan was partly the cause of Pakistan’s creation, it has largely been the reason behind the Western aid that sustains Pakistan today