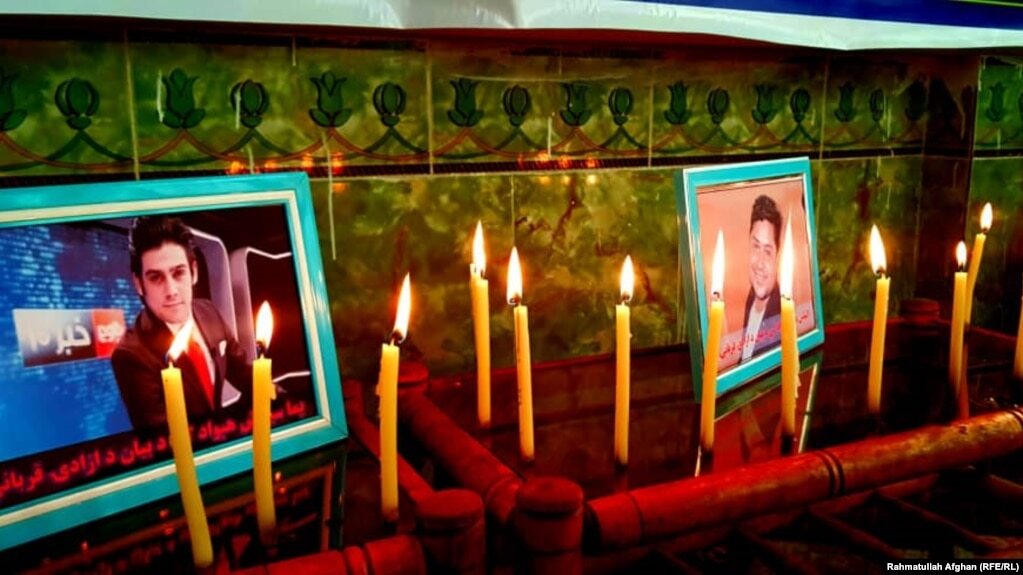 A spate of recent journalist killings and attacks on media in Afghanistan is prompting some Afghan journalists to leave their jobs while others fear for their lives daily.

The mounting environment of fear across the country raises questions about the future of media and free speech in Afghanistan, where authorities, civil society, and Western allies have brandished a relatively free press as a major achievement since the fall of the hard-line Taliban regime nearly two decades ago.

“We are facing a deeply worrying situation,” Hidayatullah Ziarmal, head of Uranus, a private television station in the northeastern Afghan city of Kunduz, told Radio Free Afghanistan. Many journalists and employees at his station quit their jobs after an angry mob ransacked a local radio station three weeks ago.

“It is not acceptable that a mob attacks a media organization to destroy its equipment and terrify its staff,” Ziarmal said. “If someone has a complaint, they can go to the authorities and have it addressed in accordance with the law.”

Journalists in Kunduz were shocked when a Muslim cleric incited a mob to ransack the offices of Radio Zohra, a local FM station, on January 15. The cleric accused the station of playing loud music, which he said interfered with prayer services. Mohsen Ahmad, the station’s director, said the attack damaged equipment and forced them to stop broadcasts but no one was hurt.

“The attack left us paralyzed because [before] we only worried about being attacked by terrorist groups, but now we fear fellow citizens, too,” Haseebullah Hasas, a radio journalist for a station also called Kunduz, told Radio Free Afghanistan. “Even coming to the office now seems like a very dangerous proposition.”

But elsewhere in Afghanistan, the threats posed by militant groups loom large over media workers. Five journalists have been killed in targeted attacks by militants in the past three months.

These include Mohammad Ilyas Dayee, RFE/EL’s correspondent in the volatile southern province of Helmand who was killed by a magnetic bomb in November. His killing came days after Yama Siyawash, a former TV presenter, was killed in a similar attack in Kabul. Rehamtullah Nekzad, a correspondent for Al-Jazeera in the southeastern city of Ghazni, and Bismillah Adel Aimaq, a radio journalist in the western province of Ghor, were shot dead in December and January, respectively.

In the eastern province of Nangarhar, Muqadas Salarzai, a female journalist, says the December killing of Malala Maiwand, a journalist and TV presenter, showcases the dangers they face while practicing their profession.

“We are in great pain,” she told Radio Free Afghanistan. “Our colleagues are killed in broad daylight while their murderers escape.”

“If the government paid serious attention, this would not happen,” she added.

Sana Noori, another female journalist in Nangarhar’s capital, Jalalabad, says those threatening journalists aim to stifle the freedom of expression in Afghanistan, where print and electronic media have mushroomed thanks to generous international aid and a government that broadly tolerates independent media.

“Journalists just serve their community. This is why the government and all sides involved in the fighting here need to protect them,” she said.

Attaullah Khogyani, a spokesman for Nangarhar’s governor, however, echoed other Afghan officials’ claims that they are doing everything in their power.

“We are doing our best to protect journalists,” he told Radio Free Afghanistan. “Even the governor is personally in contact with many journalists and has asked various government departments to protect them.”

But international media watchdogs are not convinced. “The safety situation for journalists in Afghanistan must be a major priority for the Afghanistan government,” the Brussels-based International Federation of Journalists urged Kabul in a January statement.

Back in Kunduz, Geeta Muhammadi, a female radio journalist, says she will only feel safe once the mob that attacked Radio Zohra meets justice. “I feel rattled by the attack,” she told Radio Free Afghanistan. “This attack needs to be investigated seriously so that its perpetrators can be punished.”

Shahbaz Sabri, head of the Afghan Journalists Safety Committee in Kunduz, says most journalists already find it “impossible” to work in an increasingly dangerous environment.

He says if the government and the international community fail to address the situation, Afghan media will face a catastrophe. “If this situation persists, there will be nothing left of the media,” he warned.