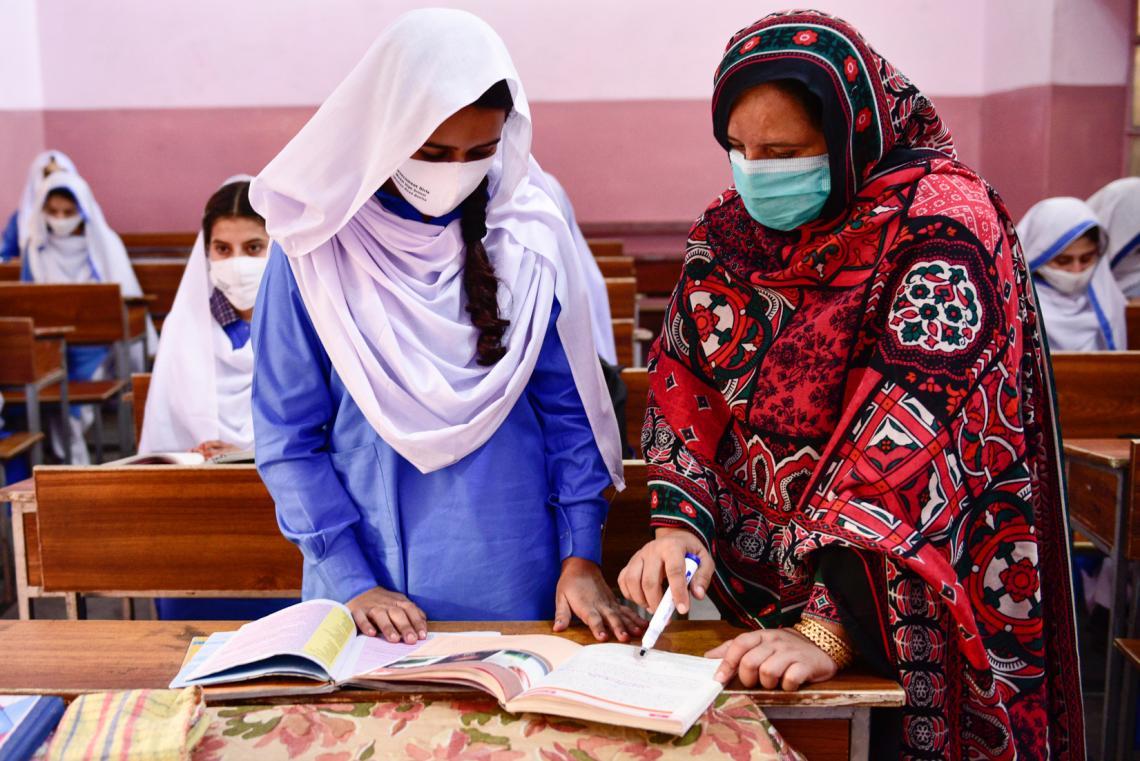 Located in a densely populated, low-income neighbourhood of Quetta, capital of Pakistan’s Balochistan province, the school has just undergone major renovations as part of the School Development Programme (SDP) led by the Secondary Education Department.

Colourfully painted, bright classrooms, functional toilets, open-air handwashing facilities and welcoming smiles from the teachers are a pleasant surprise adding to the joy of returning to school. On-campus classes have resumed at last, after months of school closure due to the COVID-19 pandemic.

Among the jubilant students is 19-year-old Kausar Pervaiz, who is returning to school after a gap of more than two years. She used to be a bright student but dropped out in 2018.

For a long time, Kausar had been perturbed about the condition of her school building and lack of basic facilities. When her mother suddenly fell ill, she decided to stay home to care for her as her father had died and she was the eldest of three siblings. Her younger sisters continued going to school.

The premises of GGHS Killi Shaikhan had been run down for many years and lacked some basic facilities. All six toilets were non-functional, classrooms were dark and dingy, and the play area was unpaved and dusty. Many students had dropped out despite the best efforts of the management to retain them.

When Kausar heard that her school had been renovated, she went with her cousin, who had also dropped out, and visited the freshly refurbished building.

“We could hardly believe what we saw as everything looked brand new,” Kausar explains. “We particularly noted the toilets were fully functional and had running water.”

Excited to see their renovated school, Kausar and her cousin decided to enroll again. Kausar spoke to her mother whose health had improved and she agreed to let her resume education.

While some private schools in the area offer better facilities, most families in Killi Shaikhan cannot afford to send their children to these expensive schools.

“Our teachers are good, and we were keen to get an education but the lack of facilities, especially non-functional toilets, was a major concern until the school was refurbished,” says Kausar.

“Girls need to use toilets frequently but the ones in our school did not work. We had to hold ourselves till the time we got home. I thought of changing school, but my parents couldn’t afford to send me anywhere else.”

All these problems have now been resolved thanks to the European Union grant which funds the Balochistan Basic Education Programme. With support from UNICEF, Balochistan is improving school infrastructure and installing basic facilities, in particular related to clean water and sanitation. So far more than 1368 schools have been renovated as part of the programme.

The renovation of the school was done while the school was closed due to COVID-19 lockdowns. The premises were rehabilitated, and facilities installed to help students access safe drinking water and functional toilets. This has also made it possible for the teachers to enforce all COVID-19 key preventive behaviours at the school.

Moreover, new classrooms were built to provide younger children in the community with Early Childhood Education for the first time.

“It is overwhelming to see how our school has changed and now provides children with the best learning environment,” says Ms. Samina Zamir, Head Teacher at the school.

Parents and community members were fully involved in the project, to foster ownership and sustainability.

“By working together with the community, we have removed some of the issues which caused students to have low achievements, in particular girls. They will now be able to access quality education in all schools covered in the programme,” says Mr. Dawood Khan Khilji, Additional Secretary (Dev) at the Secondary Education Department, who as a member of the community made a personal donation to help renovate GGHS Killi Shaikhan.

An additional 200 students have enrolled at Killi Shaikhan school since it reopened, some coming from private schools, proving how big a difference the improved facilities have made in the life of the community.