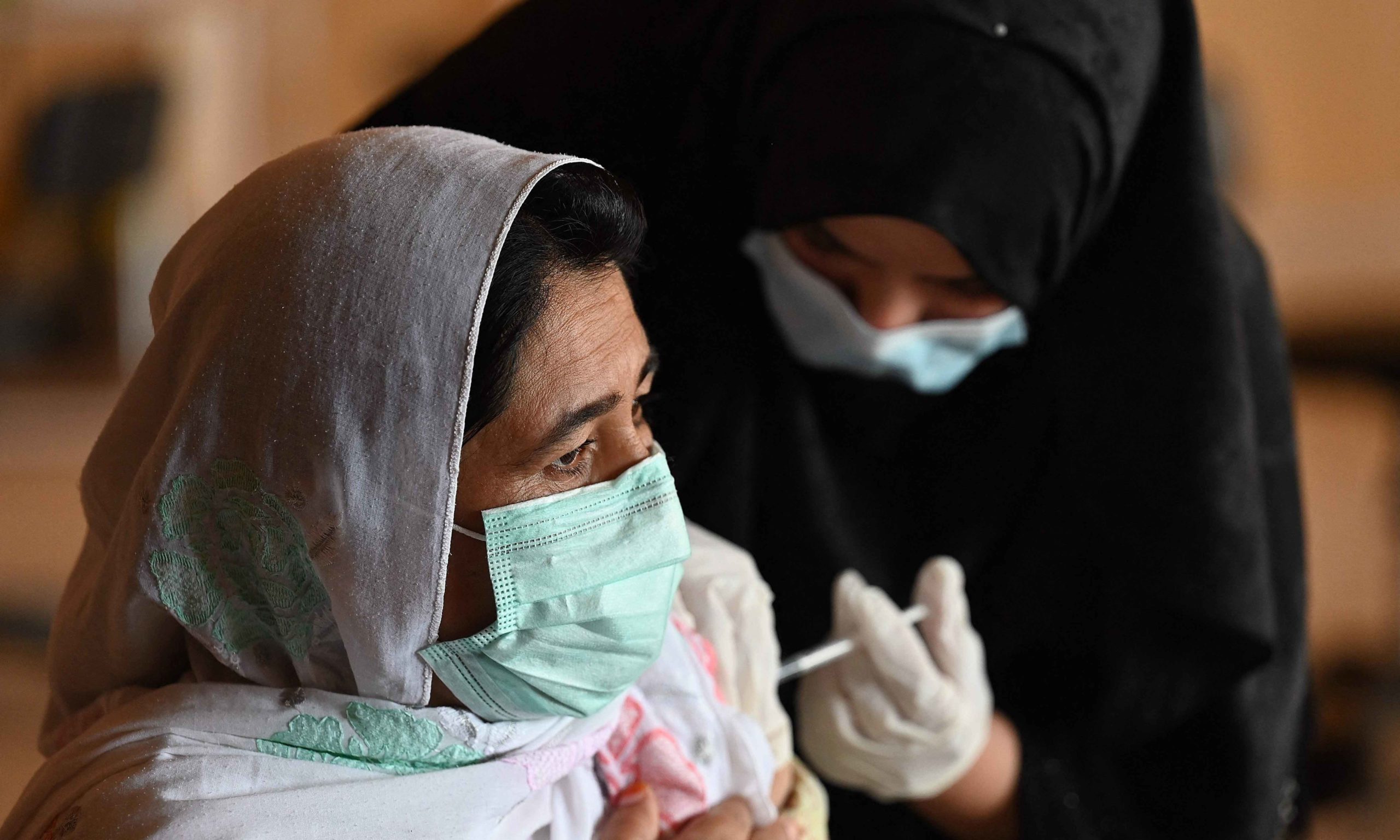 A prove-your-identity condition may leave three million people in the country without corona virus vaccines, including mainly unregistered refugees, jeopardizing Pakistan’s fight against the pandemic.

Currently, only Pakistani nationals or immigrants who have either computerised national identification cards (CNIC) or official refugee status can receive the jabs.

Pakistan has so far vaccinated nearly 3 million people, a ratio well below that of India.

Over 1.5 million unregistered refugees living in Pakistan, particularly from Afghanistan, will miss out on the vaccination for not having identity documents.

Besides, thousands of CNICs have been blocked in recent years by the National Database Registration Authority (Nadra) for different reasons.

There are around 2.8 million documented and undocumented Afghan refugees in Pakistan, making it the world’s second-largest refugee population after Syrians in Turkey.

Only around half of the refugees are registered, with the rest living undocumented, mostly in Khyber Pakhtunkhwa and Balochistan, which border the war-torn Afghanistan.

The United Nations suggests that more than 3.8 million refugees have been repatriated to Afghanistan since 2002. However, many have returned to Pakistan due to ongoing violence, unemployment, and lack of education and medical facilities.

Apart from Afghan refugees, Pakistan, and mainly Karachi, also has a sizable population of unregistered Bengali, Nepali, and Rohingya immigrants.

As per the current procedure, citizens before being vaccinated must register themselves by sending their CNIC numbers to a designated official portal.

When asked about any alternative ways to get vaccinated for unregistered refugees or citizens who do not have the CNIC, Special Assistant to the Prime Minister on Health Dr Faisal Sultan told Anadolu Agency that refugees with “Proof of Registration (PoR)” cards issued by the government were allowed to get vaccinated.

In the brief message, he did not respond to a query about an alternative way for unregistered refugees.

The Pakistan Medical Association (PMA) has demanded that the registration process be halted because it “may deprive millions of people” of Covid-19 vaccines.

“We have long been demanding that unnecessary conditions for vaccination will discourage millions to get vaccinated,” Dr Qaisar Sajjad, the PMA’s secretary-general, told Anadolu Agency.

According to Qaisar, around 3 million locals and refugees would not be eligible to receive vaccinations under the current system.

The large numbers of Afghan, Bengali, Nepali, and Rohingya refugees will not be the only ones unable to get vaccinated against the highly contagious Covid-19. So will a significant number of citizens, mostly those living in rural areas and who have not yet obtained a CNIC, he said.

“It will simply tatter the benefits of the large-scale vaccination and the relentless efforts of the health professionals if such a huge portion of the population is not vaccinated just because they do not have identity cards,” Sajjad opined.

“To achieve the goal, we have to vaccinate every single adult. The government must remove this [identity card] condition and simply let everyone get vaccinated,” he maintained.

Zahir Pashtun, who works for a non-governmental organisation dedicated to refugee welfare, supported the call to remove the identification card requirement for vaccinations.

“The government has included the Afghan refugees with PoRs in the vaccination programme a welcome step. However, nearly half of the refugees in Pakistan are unregistered. They should be vaccinated,” Pashtun told Anadolu Agency.

Echoing Pashtun’s views, Noor Mohammad Arakani, the head of the Rohingya Solidarity Forum that works for the welfare of the group displaced from Myanmar, said: “A large number of Rohingyas still don’t have refugee identification cards. The government should either remove this condition or announce an alternative vaccination programmed.”

“Even among those who have identification cards, the vaccination rate is still very low. The card condition will further sink this ratio,” he told Anadolu Agency.

Karachi is home to more than 400,000 Rohingya Muslims — often referred to as Burmese — the highest number after Myanmar and now Bangladesh, according to unofficial estimates.

The Chief Commissioner for Afghan Refugees Saleem Khan said the government could not do anything for “faceless” refugees.

He told Anadolu Agency that the problem would have been resolved automatically if the refugees had registered with the government.

However, he underlined that nearly 850,000 Afghans with Afghan citizen cards had been included in the ongoing vaccination drive.

In some parts of the country, he added, Afghan refugees who met the criteria for receiving the jab had already started to register themselves and some had received their first vaccine dose.

Nonetheless, unregistered refugees were not covered by the UNHCR’s mandate, he added.

“The virus doesn’t know whether an individual is a refugee or a local. It is a challenge to everyone. Nobody is safe until all of us are safe,” Afridi told Anadolu Agency.