27 October – The black day for Kashmir 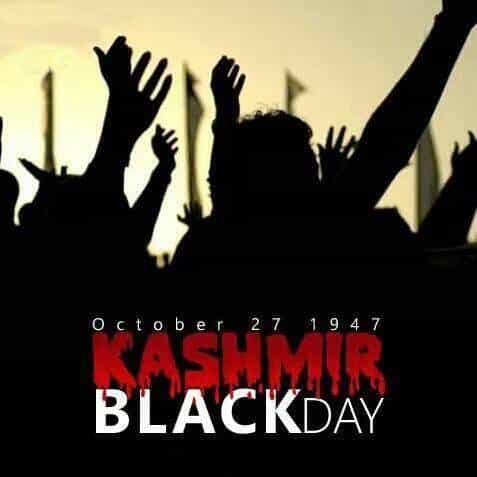 Bad luck for the Kashmiris began after the signing of the Treaty of Amritsar (1846) in which the British sold Kashmir to Gulab Singh for a paltry sum. After the British left the subcontinent in 1947, like the other princely states, Kashmir thought that it would be given a chance to decide its fate. However, that was not to be. A forged document was prepared on 26 October 1947 on which there was no signature of Maharaja Hari Singh (as claimed by India).

India has not produced the document till today at any international forum. Using the forged document, on 27 October 1947, India sent its army through Pathankot to occupy Kashmir. The route was given away to India by Radcliffe in an unfair way. The area was Muslim-dominated and should have gone to Pakistan. 27 October is a black day for Kashmir. On this day, India began its illegal occupation. With time, Indian atrocities have only increased in occupied Kashmir. Unlike other princely states that were allowed to decide whether they wanted to join India or Pakistan, Kashmiris were held hostage at the gunpoint. The military siege started on 17 October 1947 continues even today. The population of Kashmir is 90 lakh and the number of Indian forces present in Kashmir has grown to about nine lakh. India’s military invasion was against the UN charter. It has also violated all the subsequent UN resolutions on Kashmir.

In fact, prior to the military invasion, India had already posted the Gorkha regiment in Jammu and Kashmir as civilians. The regiment killed many Muslims in Jammu in November 1947. International media has reported that India has been involved in the killing of 2.5 lakh Muslims in Jammu. As per Kashmiri sources, the number is 4 lakh.

Kashmiris around the globe observe the 27th of October as a black day. On this day, Indian forces completed their unholy occupation of Kashmir. This is a protest against the duplicitous attitude of the world powers. This is against the UN as well, which conducted a referendum in East Timor within six months, as the inhabitants were Christians. It also intervened in the case of South Sudan. Afghanistan was ruined and Iraq was plundered but Kashmiris are still waiting for the plebiscite. India’s aggression needs to stop. Otherwise, it will result in human tragedy.